The issue of cats and birds is a very emotional and usually a very polarizing one. On one hand, people who enjoy feeding birds and observing nature are distressed by the damage done by cats. On the other side are people who want to allow their cats freedom to roam outside as they please.

It must be noted that this is not an anti-cat essay. Cliff and I have always had cats and always kept them inside. Indoor cats live longer, have healthier lives compared to outdoor cats who are always threatened by disease (several of which are very nasty and incurable. Feline Infectious Peritonitis and Feline Leukemia Virus are two of the worst. Thankfully, there is now a vaccine for the leukemia virus), roads and deaths by cars, antifreeze, fan belts and other accidents.
Outdoor cats kill far more birds and small mammals than their owners realize - cats will bring home only a small number of the animals they have killed to show off to their “people.” We hope that by stating the following facts, cat owners will realize the damage truly done by cats.

First, let us look at the facts as found by Bird Studies Canada and numerous American studies. 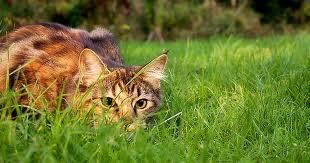 1) Many bird species have evolved without predation from cats occurring and some did not learn how to deal with them in time.
2) Cats are an introduced species in many areas (small cats did not arrive in North America and other parts of the world until brought there by people), similar to the House Sparrow and European Starling.

3) Cats, both feral and domestic, kill birds, small mammals and other creatures.
4) A recent study by scientists from the University of Georgia and the National Geographic Society’s Crittercam program recorded the outdoor activities of house cats outfitted with a video camera. Nearly one-third of these cats succeeded in capturing or killing animals, killing an average of 2.1 animals every week they were outside. Bird kills made up about 13% of the total kills (published in Bird Studies Canada August 2012). Another American study (“Feral Cats and their Management” 2010 from the University of Nebraska) supports these findings. It is now estimated that cats kill, at least, an estimated 480-500 million birds a year in the US. Some feel that this numbers are conservative, that the actual numbers could be as high as 1 million. To learn more about these studies, visit the American Bird Conservancy website. 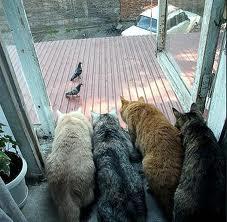 accounted for 49% of them. In areas where cats, either feral or domestic, were not present, mortality was much lower. This is not an isolated case. Other studies, with research gathered from web cams around cat necks, have found this to occur everywhere cats and birds interact.
6) Cats kill wildlife no matter how well fed they are. And no, bells on cats have no effect at all on their hunting success.
7) Cats kill more native wildlife than nuisance or invasive species.
8) Cats are a major contributing factor in the decline of bird populations. Habitat loss is the main reason. Cats are the second.
9) Worldwide, cats are responsible for the extinction of at least 33 bird species.
10) BC has a growing cat crisis that is seriously impacting our native and migratory bird populations.
11) It is not “normal” for cats to hunt birds because cats will hunt for sport or pleasure not for hunger. Also, cats are not a native species of North America so they have no place in our eco-system. 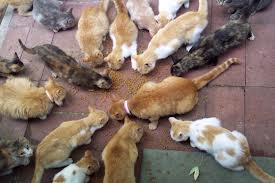 BC’s CAT-ASTROPHE
: 57 - the percentage of cats in the overall total of animals received by BC SPCA shelters (compared to 32% for dogs and 10% for other animals)
YOU”VE GOT TO BE KITTEN ME
: 7,134 - the number of kittens admitted annually into BCSPCA shelters (accounting for 40% of overall cat intake)
STRAYING ALIVE
: 6,027 - the number of stray adult cats admitted to shelters annually
: 11 - the percentage of stray cats claimed by their guardians (compared to 66% for stray adult dogs)
: 8 - the number of times longer, on average, an unclaimed stray adult cat remains in the shelter than a claimed stray (62 days compared to eight days, respectively) 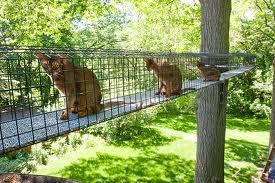 If you have a cat you feel must go outside, there are ways to do it in a controlled manner. Many companies are now coming out with outdoor cat enclosures. These fenced areas can be erected in a deck or yard and allow kitty to run and play without being a nuisance to neighbours or destructive to wild life. A Canadian company, Habitat Haven out of Toronto, makes several sizes of cat enclosures from ones that fit small balconies to large yard ones. Check out their website at www.habitathaven.com

Another way to control cats in the environment is through cat licensing, similar to ones we get for dogs. A cat that has a license or a microchip is more likely to find his way back to his owner and less likely to roam the streets. Some municipalities (Creston in southeast BC and Calgary, Alberta are two successful examples) have implemented licensing already and found it to be a great success. A movement for more responsible pet ownership will be a step forward in animal care and the decrease in the number of unwanted kittens and
adult cats in our environment.

If you are troubled by cats in your yard, here are some suggestions to keep your birds safe.

1) keep bird feeders and bird baths at least 5 feet from shrubbery and other cover. The ideal distance in 10-12 ft but most yards will not accommodate 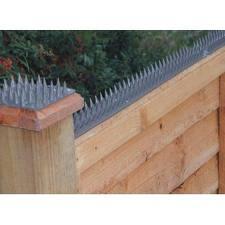 that.
2) install decorative or wire fencing in front of shrubs that conceal predators to prevent sneak attacks from cats
3) avoid wooden posts for hanging feeders or houses (unless you baffle them). Metal poles do not allow cats to climb up.
4) avoid low hanging feeders and ground feeders if you have a cat problem.
5) repair gaps in fencing that can allow cats access. You may need to put something on the top of your fence as well to prevent cats from jumping up and over.
6) chose safe bird house designs with steep roofs and no perches and place on either a baffled pole or 8 feet above the ground.
7) use products to make your yard distasteful to cats. Powders scented with urine of predatory animals like coyote or fox can also be used around the perimeter of your yard to make it seem like a predator lives there. The downside is, it must be reapplied after rains.
8) make an enclosure around your bird feeder station with chicken wire (or some other, more decorative wire) so cats cannot sit underneath and catch the birds. Have it high enough so that cats will need to jump up and over the fence, giving birds enough time to escape.